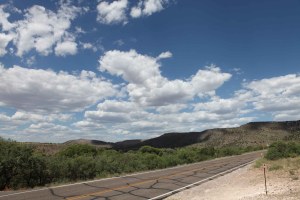 was held on Sunday September 5th, 2010.  I was lucky enough to have been given a complimentary ticket by my friend Courtney Vickers of Arizona Stronghold.  Page Springs cellars is owned by legendary Arizona winemaker Eric Glomski while Arizona Stronghold is his partnership with Maynard Keenan.

The fall harvest party was held on the Page Springs property in Cornville, Arizona.  Before the party started I wandered around the property looking for things to take photos of.

I saw some really interesting lizards and bugs.  I saw lots of grapes, some green some darker some deep purple, some eaten by animals.  After wandering down behind the actual winery structure I came across a beautiful stone pathway that led down towards the creek.  The walkway was covered with a vine covered pergola and the mottled sunlight played off my eyes as I walked underneath.

I took some pictures, took some flipcam footage and then headed off to my accommodations at Desert Rose B&B.  I met up with Rhonni and Josh Moffitt there, and the owner of Desert Rose gave us a ride back to the vineyard, and said he would be back at 11pm to pick us up.  Having a designated driver is really the key to 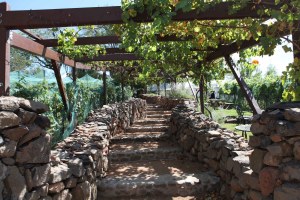 being able to have a good time if you are drinking.

By the time we arrived the barbecue was in full swing, there must have been at least 175 pounds of pork in the huge barbecue.  I picked up a plate of pulled pork, coleslaw and chips and headed down to the party area. 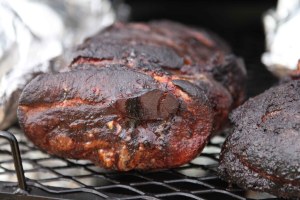 The party area was really well set up I must say.  They had tables and chairs all beneath the big gangly oak tree.  Next to that they had a hay bale maze for the kids, and below all of this, overlooking the creek was the stage for the bands and the dancing area.  There was hay laid on the ground to minimize dust too.  I gobbled down my food and then headed back up to the toll booth to grab a bottle of wine.

I had the MSGp.  Thats right, thats how you spell it… MSGp.   The wine is a blend of Mourvedre, Syrah, Grenache and Petit Sirah.  It was pretty delicious.  Fruit forward, but not sweet.  Complex enough to justify another bottle.  I liked the earthy component, it was just barely there, and there was also a little bit of thyme on the mid palate aswell.  I would say that this wine is definitely a great party wine!

As the sun set the bands began playing. 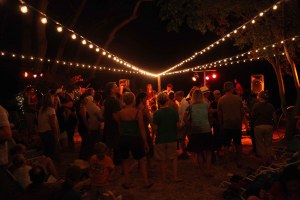 The first band was great little country band with dueling banjo and mandolin.  The second band was a folksy group from California and featured an interesting instrument called a harmonium.  The third band was a group from Seattle called Luc and the Lovingtons.  They played a great set of get up and dance funk jam reggae rock music. 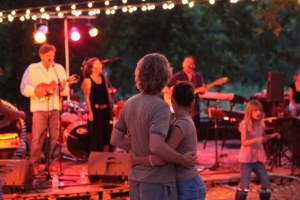 Later on I chatted with Eric and remarked that it must be quite satisfying to think that an event like this is the culmination of all the hard work he puts in during the rest of the year.  And all the hard work he has put in over the last 10 years.  This is what its all about; family and friends, good music and food -Great Wine! and just a general feeling of come as you are and let yourself be.  The crowd was so eclectic, there were kids, young adults parents grand parents, people from all walks of life.

If you find yourself in Arizona for Labor day weekend in 2011 you might want to head up to Cornville for next year’s party.