Ron Miller played college football for USC in the early 1950’s, was drafted in 1961 by the L.A. Rams and played the 1962 season for the Rams.  The story as told by Russ is that back in about 1953  a group of Ron’s friends were going out and they needed an extra guy for one of the girls who didn’t have a date.  Ron met Diane and the two fell in love and were married in 1954. Turns out that Diane was Walt Disney’s daughter!  After football Ron returned to work for Disney (he had worked there in the 50’s) . Eventually Ron became the President and C.E.O of Disney between 1978 and 1984.

In 1981 Ron and Diane established Silverado Vineyards ( click HERE for a complete timeline of the vineyard ) . Currently the vineyard produces about 60,000 cases of wine a year.

I had a sit down tasting with Russ Weis at Hearth ’61 in Paradise Valley, to taste some of the current offerings from the winery.

We started with the 2016 Chardonnay from Carneros District, Napa. 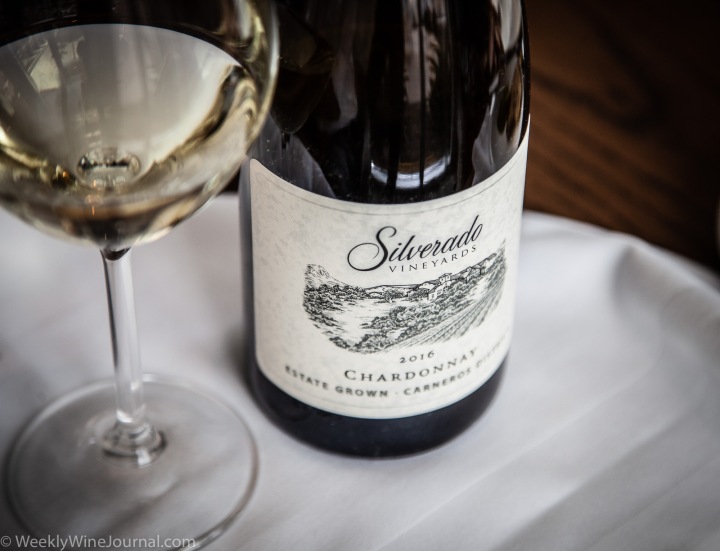 If you do not like oaky buttery Chardonnay you will love this wine.  This wine is big, bold and crisp, we paired it with jumbo shrimp and it was fantastic.

The next two wines we tasted were 2014 GEO and SOLO.

Both of these wines were superb.  Solo was the bigger bolder and more complex of the two, but Geo was more approachable right out of the bottle.  We paired both these wines with Niman Ranch flat iron steak, medium rare of course.

Solo will set you back $125, while Geo runs $75, if you have the budget I would suggest  both, its interesting to compare the different styles side by side.