I had a chance to meet Dan Cohn for dinner earlier this fall.  We met for an old school steak dinner at the famous Durant’s steakhouse in Phoenix Arizona and of course to taste some wines.

Dan, is the son of Bruce Cohn, founder of the winery.  Bruce is also the manager of a band called The Doobie Brothers, and has been since 1970.  Bruce founded the B.R. Cohn winery in 1984, but he had already been running a vineyard and selling grapes for 10 years by that time.

I sat down in one of the booths at Durant’s and waited for Dan.  He arrived a few minutes after me and greeted me warmly.  The first thing I noticed about Dan is that he is a straight forward completely un-shy (if that’s even a word) kind of guy. Or at least that is how he comes across.  He gets straight to the point, he’s confident but has a sort of boyish sense of humor.  In talking about how he currently runs the whole show for B.R. Cohn, he almost laughed:

“My office is the bedroom I grew up in, like literally the tasting room and offices is the house I grew up in.”   Suddenly he stood up and walked over to another table and greeted the guests.  They had just ordered a bottle of B.R. Cohen with their dinner and he quickly went over and thanked them personally.  The guests were quite old and I could tell they didn’t quite know what to make of this guy.  He was wearing a purple corduroy type blazer and had a paisley shirt and a fat tie on.  He looked like a rock star.  A little later on at another table a young couple also ordered some of his wine and he raised a glass to them, their waiter let them know who he was and they were definitely interested.

Dan talked a little bit about winery life, but for the most part he was persistent in asking me questions.  While not the greatest for pulling information, I did find it flattering and interesting.  Not a lot of wine makers and people in the business want to know about the details of wine blogging.  His interest was genuine and I appreciated that.

When it came time to order, of course we had steak, and paired it with B.R. Cohn’s Olive Hill Estate Cabernet. 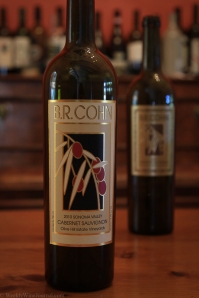 This wine is 100% Cabernet, aged 24 months in French Oak.  The flavors of anise and mint dominate the palate.  This wine would pair very well with Lamb, although it did go quite nicely with the steak as well.  3,000 cases were produced and the suggested retail is $55. 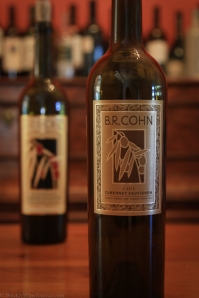 I was surprised by how different the Gold Label is to the Olive Hill.  This wine is solid, still young and will benefit from several hours of decanting in the near future.  The blend is 67% Napa County and 33% Sonoma County, all Cabernet.  Each lot is aged separately in French Oak.  4,800 cases were produced and the suggested retail is $40.  I was surprised to see the price at only $40. This a really good deal for that price.  The wine is ideally suited to prime cuts of beef grilled over an open flame.

*These wines were provided as review samples