What kind of skateboard(s) do you have?  Do you ride regular or goofy foot? Can you do an Ollie?

Sacha: I don’t have any skateboards. There are a bunch of wheel-less decks in our office that have Jason’s name on them. And I don’t know the difference between goofy foot or regular, but I do know what an Ollie is because I saw Tony Hawk describing it on You Tube…although I don’t think Jason would approve of this because Hawk is totally passe in the skateboarding world. The language of skateboarding is funny sounding gibberish to me, but in general the guys are hot and have cool tattoos. (see Jason)

Jason: In my collection of skateboards, I have one of each of my pro models. Nowadays the boards I ride are made by Girl Skateboards, far and away the best company in skateboarding. I use Independent trucks and Spitfire wheels, exclusively. My natural stance is goofy footed, but when I was pro in the 90’s, the “new” thing was to skate “switchstance”, meaning you learn to do tricks both regular and goofy footed. There are some tricks I can do in both stances, but some I do better regular, some goofy. I learned how to ollie in probably 1982. (And to clarify, I don’t think Tony Hawk is passe.)

What are some of the most prized wines in your collection? Do you prefer Bordeaux or Meritage?  Can you open a bottle of wine with your shoe?

Sacha: I have an extensive collection of Sine Qua Non, which I began collecting when I was Manfred Krankl’s assistant. I prize these bottles the most because of my terrific experience with MK, the gorgeous label designs, the juice inside, and–wow–are they worth some money. Also have quite a few old Porto’s, d’Yquem, and stickies from Kracher. Oldest bottle is a 1942 La Tache.
Bordeaux or Meritage? I prefer never to say the word Meritage because it makes me think of a bunch of suits in an office coming up with the next catch-phrase for their marketing scheme.
No shoe opening. But I did watch that video that was circulating around a while back and took mental notes in case I need to employ the technique.

Swirl Smell Slurp was included in Imbibe magazine’s “10 wine blogs worth a click”  What did you drink to celebrate?

Sacha: I first figured it out in the morning after checking our stats. What are all these clicks from Imbibe? Ah… I was smoking a cigarette and having a cup of coffee.

Jason: I don’t remember exactly. I think I saw it in the morning, so we probably celebrated with a nice french-pressed coffee.

How much wine do you have in your collection?  How do you store it?

Sacha: I’ve relocated back to Los Angeles, but still have a home in the Napa Valley. I think the cellar there has about 1400 bottles in it, although I haven’t taken inventory in over a year (it’s boring and cold, so I don’t do it very often). The wine is stored in a cellar I designed and my handsome handyman built. The door is 10 inches thick and there is a Breezeair unit keeping it cool and the humidity correct. I lost a parking space in the garage to accommodate it, but gained a really nice room full of wine. It’s a great place to hang out for a few minutes while sipping a glass…lots of pretty bottles to look at. Including some empties that I just can’t get rid of: 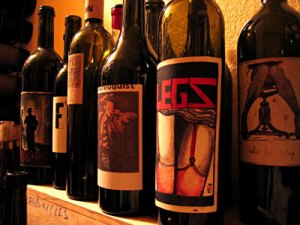 Here in LA the only wine collection I have is one bottle of Williams Selyum Pinot Noir that sits snug in my closet. He gave me the bottle for my birthday. Everything else gets consumed pretty quickly after it’s bought.

Nice picture of some empty bottles.

Jason, as an architect, have you designed a wine centric home?

Jason: Not really. I want to! I have designed a few wine-centric conceptual projects. When I was in school I designed a wine bar using a lot of cloth and physical properties of cloth that was called “Three Sheets to the Wind”. The newest concept I am currently working on is a high-tech wine cellar pod. We are finishing the design and looking for software developers to engineer the programs. After that I will try to find investors to fabricate it and finance the marketing, etc.

How long have you two been blogging about wine as SSS?  Have you noticed any changes in blogging since then?

Jason: Our first post was on October 13th, 2009, so not that long ago. I have had a personal blog since 2003, and I have definitely seen changes since then. Blogs have become much more subject/genre driven. And they can make money, which was something I wouldn’t have believed in 2003. Even 5 years ago I think blogs weren’t taken that seriously, and were primarily read by other bloggers. It was very incestuous. Now they (the reputable ones at least) are a valuable source of information; maybe not for heavy world-changing issues, but for food, travel, fashion, wine, hotels, music, architecture, art–they can be quite influential.

Sacha: Changes in blogging: we both have had personal blogs for 6 plus years, so the biggest change for us personally would be that we now do a big portion of our blogging together. Which sometimes leads to quibbles and sneers, but ultimately is fun.

Sacha, if you could have a superpower, what would it be?

Sacha: Well. Something to do with flying. Or…the ability to imbibe and not get a hangover. Although that might be dangerous. Sometimes I need the reminder not to over indulge.

Jason, if you could have Sacha have a superpower, what would it be?

Jason: I saw that awful movie with Uma Thurman and Luke Wilson called, umm, “My Super Ex Girlfriend.” When they got in a fight she flew to the ocean to get a shark, which she then tossed through Luke Wilson’s window into his apartment. I have a very firm “No ocean-dwelling predators in the house rule” so I think I’d like her to stay just the way she is.

Other than wine, what things do you guys collect?

Sacha: Tons of design, art, photography, and architecture books. All the letters anyone I care about has ever written me and a few letters that say mean things about me from people I don’t care about at all. But I am super vindictive and like to keep them around so I don’t forget. Tons of fashion magazines. Shoes. Old typewriters and Parker 51 pens. Paper. I have an addiction to paper and have a small office supply store sized inventory of it. Vintage swizzle sticks.

Where is your next travel destination outside of the U.S.?

Jason: We have been talking about Spain. Barcelona and The Basque Country are two of my favorite places to visit. I’ve never been to The Basque Country in the winter, so it might be nice to rent a cabin in the mountains between San Sebastian and Bilbao. We have been traveling a lot lately and Sacha is about to move into a new house, so I think we are going to put away the luggage for a while. Oh, and we need to make some money.

Sacha: Jason keeps raving about the Basque country. We may try to go in the Fall/Winter. It is fueling his current obsession with Txakolina wines (It’s the first thing he looks for on any restaurant’s wine list. One week in New York recently we drank four different bottles of it. Harder to come by in LA.)

There you have it folks…