The phenomenon of women in wine is not as recent as you might think, nor is it limited to a few famous wine makers such as Heidi Barrett.  While most casual wine drinkers might not have heard of Janet Myers, they most surely will be familiar with Napa Valley producer Franciscan Estates.  Franciscan Estates started back in 1972 but now boasts 240 acres under vine in the prime Oakville District of Napa Valley. Franciscan Estates began its rise to prominence in the mid ’70’s by making wine in small lots and then blending them together to get the desired result.  Franciscan adopted the Bordeaux style of wine making 1985 with the launch of its flagship wine, Magnifcat..   Magnificat is a rich powerful full bodied wine using the traditional Bordeaux varieties of grape. Janet Myer’s joined the team at Franciscan in 2003 but her first job was working harvest at Robert Mondavi when she was still a student at UC Davis.  Is it just me or am I seeing a lot of great wine makers coming out of UC Davis?   Janet has travelled to Italy and Australia to work with leading vinters to improve her skills and  has been director of wine at Franciscan since 2005, the same vintage that I tasted recently at a Women & Wine dinner.
The 2005 Magnificat is a blend of 73% Cabernet Sauvignon, 23% Merlot, 2% Malbec, 1% Petit Verdot and 1% Cabernet Franc.  I put my nose deep in the glass and took a big “sniffy sniff” and was met with the quintessential Napa nose; Cassis, Vanilla and cedary oak.  The palate was plummy with black cherry and Anise and was a superb match for the New York strip steak grilled medium rare. The alcohol is 14.5% which may be a little higher than the wines of Bordeaux, but I did not find the wine to be overly alcoholic or hot. Production was a little over 24,000 cases so consumer’s shouldn’t have any trouble finding this vintage or more recent vintages. At $50 a bottle this wine is more than I would spend on a daily drinker, but quite reasonable as a monthly treat. 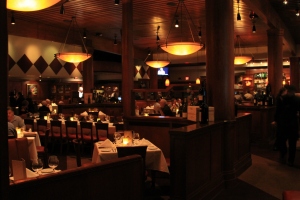 Last week Fleming’s Steakhouses across the country hosted their “Women & Wine” dinners.  At the events guests were treated to some amazing wines made by some legendary women in the wine world including Cathy Corison, Kristin Belair and Janet Myers.

We started out the evening with swiss cheese puffs and house cured salmon, citrus creme fraiche and crispy wonton.  These were paired with Cathy Corison’s 2000 vintage  Cabernet Sauvignon from Napa valley.  Cathy Corison is a legendary wine maker having made wines for over 30 years for brands like Chappellet, Staglin Family, York Creek and Long Meadow Ranch.  It was very nice to taste a wine that has had significant time to age in the bottle.  This  wine was very refined with beautiful and mature tannins.  It paired very well with the food as it was soft and gentle enough as to not overpower  the food.

Next we enjoyed Butternut squash bisque with Danish blue cheese fondue and bacon herb bruschetta.  This was paired with Honig, Cabernet Sauvignon 2006 Napa.  Kristin Belair is the wine maker at Honig and has been since 1998.  This wine is much bigger and bolder, younger than the Corison.  It displays notes of sage and currant as well as a pronounced creamy vanilla which only really came out after the Lamb chops served next.  The wine manager for this Fleming’s location, Tony Novak suggested we save a little of the Honig to try later after the main course, to see how it changes with the main course.  And it did.  I thought it was delicious to begin with, but actually found it tasted better with the rosemary Lamb chops which is what we enjoyed next.

Rosemary-scented lamb chops on parmesan risotto with maple roasted parsnips and a red wine demi glace.  This was paired with Franciscan, Magnificat 2005 from Napa.  This wine is made by Janet Myers who joined Franciscan Estate in 2003 and began winemaker in 2005.  Janet is also the winemaker at Mount Veeder winery. The ’05 Magnificat is a blend of 73% Cabernet, 23% Merlot, 2% Malbec, 1% Petit Verdot and 1% Cabernet Franc.  This wine is loaded with dark fruit, powerful and a made for red meat!

During the dinner we watched on a big flat screen some short videos made by Wine Spectator which gave us a little insight into the wine makers and the wines, including interviews and scenery.  I thought that was a nice touch.

My favorite part of the dinner came next: dessert!   Thick and rich caramel pudding with crumbled Heath bar on top with shortbread cookies on the side. The dessert was pretty big and I was unable to finish it all, but I kept going back and nibbling on it, I couldn’t stop myself.

At the end of dinner each table was presented with a special gift.  A set of nice big red wine glasses with the Fleming’s “F” engraved on it and a bottle of the 2005 Magnificat.  That was really an amazing touch because the wine alone retails for about $55 a bottle.  Guests enjoyed an amazing meal, amazing wines, and then were given a whole bottle and two glasses for later…all for $95 a plate.  It’s these  extras that can really make a merely good evening into a great evening.

*Disclaimer*  I attended this event as a guest of Fleming’s and Tin Can Marketing.