When you think of Napa, what do you think of?  Cabernet? Chardonnay? Most people think of those two, how about Merlot, Pinot Noir and Zinfandel?  Those five varietals wrap up the five most popular.   If you dig a little deeper or search deeper in the wine department where you buy wine you might get into the blended wines, also known as Meritage.

I recently picked up two of the finest wines I’ve had in a long time from my local Costco of all places.  Due to the economic situation, which has been a little more acute in the Phoenix area than most, the supply of higher end wine at a place like Costco has been rather limited.  But on my last visit I noticed two wines that I hadn’t seen there before and well, I made an impulse purchase. 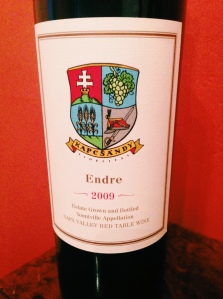 The first wine on the list is from Kapcsandy Family Winery in Yountville. Kapcsandy is much better known for its Merlot, having received near perfect scores from a wide range of critics for their Roberta’s Reserve.  But with a production of just under 200 cases and an average auction price of just under $400, its more likely I’ll see a unicorn in my backyard than a bottle of this wine in my decanter.

From the same 16 acre State Lane Vineyard in Yountville as Roberta’s Reserve,  this wine is a blend of 51% Cabernet Sauvignon, 40% Merlot, 6% Cabernet Franc and 3% Petit Verdot.  The Kapcsandy family actually purchased the historic State Lane Vineyard from Beringer in 2000.  Beringer had used the vineyard to produce its flagship Private Reserve Cabernet Sauvignon for 25 years.  The vineyard was replanted in 2002 with help from Helen Turley and with the varietals that make up this wine.  The family brought on consulting wine maker, Denis Malbec, from Chateau Latour no less, and the debut vintage came out in 2005

I popped the cork and let the wine sit for a few minutes before pouring a smallish amount.  I put my nose in and gave it a big sniff and WOW!  The aromatics practically punched me in the face.  Or more like gave me a playful slap on cheek.

The nose is intense, bright and complex.  Dry herbs, flowers and cigar tobacco.  Ripe fruit on the palate,  intense red cherries with a long mouth watering finish. All around, not what I expected, but in a very good way.