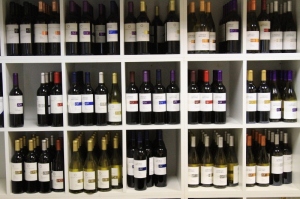 Inside the Cameron Hughes headquarters

On Friday June 17th I spent the morning at Cameron Hughes Wine headquarters in San Francisco.  Having been a fan of many of his wines over the years I was quite excited to see behind the scenes.  Cameron and his wife/business partner Jessica were tied up on business, but they were kind enough to set me up with their on staff Sommelier for a private one-on-one tasting. 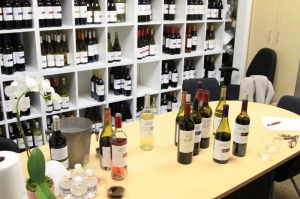 The first thing I noticed is the headquarters are very modest.  There’s a reason why Cameron Hughes is able to deliver exceptional value, and it’s not because he has lavish digs in a posh neighborhood.

I met the sommelier and she brought me into the tasting room, where there was an impressive collection of CH Wines on the wall, as well as a sizeable line up for our morning taste test.

I will post separate reviews of each wine I tasted in future posts, but for now I will give a brief overview.  First thing I noticed was the Riedel stemware.  Very nice, I am a stickler for appropriate wine glasses and I was relieved to see the very best on hand.

Quite a few of the wines had not yet been released so it was nice to get the inside “scoop” as they say in the news business.  Among the collection were some interesting whites, an Albarino from Clarksburg “Lot 240” and a Chardonnay from Willamette Valley “Lot 215” as well as a Rose from Napa, “Lot 256” 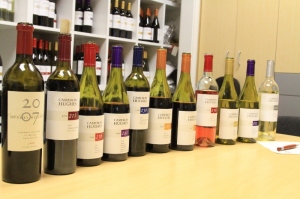 After the whites we breezed through a GSM, a Pinot Noir and a couple of Syrah’s but Cameron is better known for his reds, and in particular his Cabernet Sauvignons.  Which is were the tasting started to get really interesting.

I had a chance to taste the brand new release, Lot 230 from Chalk Hill Sonoma.  This lot is the 4th release from the same vineyard allocation.  It’s drinking very big and bold right now, alcohol is in check, but the wine could use another 6 months in the bottle to calm down a bit.  That would put it ready to pop and pour approaching the Holiday season.  Next up was Lot 211, a Napa Valley Cabernet.  I was lucky to taste it as all 3,100 cases of it are sold out!  The wine won gold at the Critics Challenge and LA International Wine Competition.  More on this wine in the future.

My visit to the Cameron Hughes Wine offices culminated in a tasting of the 2007 and the unreleased 2008 Hughes-Wellman Cabernet’s from St. Helena.  These wines are not part of the Lot program.  The wines are a joint project between Cameron’s father and his friend of over 50 years ,Sandy Wellman.  These small production (less than 800 cases made) wines are made with the help of Cameron Hughes winemaker Sam Spencer.  The price tag is by far the most expensive in the CH Wine lineup at over $50 a bottle.   The 2007 was drinking wonderfully, the 2008 could use another year in the bottle.  But having said that, the $50 price tag is an exceptional deal.  Both of these wines drink every bit as good as most of the $100+ wines I enjoyed on my trip to Napa Valley.  Once I get my storage logistics sorted out I will definitely be stocking up on both of these vintages, I just hope there is some left by the time I order!

A 1 minute video of scenes behind the scenes: