A visit to Ladera Vineyards on Howell Mountain 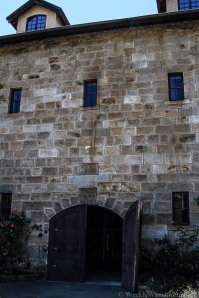 My annual pilgrimage to Napa Valley this year (2014) included a visit to Ladera Vineyards on Howell Mountain.  Howell Mountain is a sub AVA (American Viticultural Area) of the larger Napa Valley AVA and is located in the northern end of Napa Valley near Saint Helena.  I had planned to visit Ladera in 2013 but I missed my flight out of Phoenix and arrived too late to meet anyone.  This year I made arrangements to arrive a full day ahead of any winery visits!

I wanted to visit Ladera because for the last several years now I have been a huge fan of their Howell Mountain Cabernet.  I was first introduced to Ladera by Wine Library and Gary Vaynerchuk.  I ordered 6 bottles of the ’04 Howell Mountain cab and have enjoyed them immensely over the last several years, and unfortunately they are all gone now.  I’ve enjoyed other vintages at fine steak houses across the country including Smith & Wollensky in Las Vegas.

On this visit I was lucky enough to have a personal tour with Ladera’s proprietor, Pat Stotesbery.  We toured the restored winery building, which was originally built in 1886.  Pat showed me the multi level building which actually works as a gravity fed winery.  The grapes are brought in at the top level, and sorted and sent down to the next level for crushing and finally at the lower level comes the fermentation and bottling and entrance to the cave system. 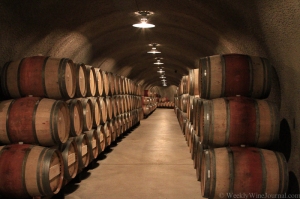 The cave system is interesting.  It’s actually in a circle with off shoots here and there, and a really cool area for special tasting parties.  The cave system covers about 18,000 square feet.  Pat pointed out a very interesting architectural feature: The tunnel for the cave is lined up directly with the entrance to the building.  This is difficult to do because the tunnel for the cave was dug the other way…meaning they tunneled from underground towards the underground walls of the building and tried to line it up so that the tunnel would be directly lined up with the large entrance doors on the opposite side of the fermentation tank room.

Pat also pointed out another architectural feature on the outside of the building.  On some of the walls, the massive stone bricks are flush and on others they stick out like misaligned legos.  This was done because back in the 1880’s there were plans to make this building larger on the one side and so they left the bricks like that so they could fit the addition in where the original structure left off.

I sat outside on the patio and tasted through the current Ladera offerings with Pat while I quizzed him on his former life.

“I’ve actually re-invented myself a couple of times”  he said.  Originally he studied accounting, and then he started a cattle ranch in Montana.  This ranch was actually used as the location for the Robert Redford movie “A River Runs Through It”  and yes that great fly fishing river ran right through his property.  The Stotesbery’s acquired Ladera in the late 1999 and undertook the massive renovation of the vineyard and original winery structure. 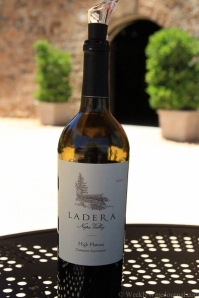 This wine is 98% Cabernet and 2% Petit Verdot blended from Laderas Howell mountain and Diamond Mountain estate vineyards.  Each of the 5 lots that make up this wine were fermented separately in open top fermenters and then aged in 60% new French Oak for 22 months.

This wine very similar to Ladera’s flagship “Howell Mountain” cabernet.  Except that it retails for $65 instead of $85.  This wine has a lot of nice fruit and tannin to it.  Black fruit with a hint of spice.

This is Ladera’s newest offering and is positioned between their Napa Valley Cabernet and the Howell Mountain Cabernet. It’s also 98% Cabernet 2% Petit Verdot, and all Howell Mountain fruit and retails for $50 a bottle.

This year Ladera added the word “Reserve” to the name of their previously named “Howell Mountain” wine.  Pat explained that everyone always asked him if he had a “reserve” wine and everyone else seems to have a “reserve” wine so he figured that the Howell Mountain cab really is the reserve wine and added reserve to the label. There, now its reserve.  This wine is 100% Cab and 100% Howell Mountain estate fruit.  The wine was aged in it’s separate blocks for 21 months in 100% new French oak and bottled without fining or filtration.  Only 2000 cases were made, retail price $85.

Ladera’s Howell Mountain cab has been one of my steakhouse favorites.  This wine has been extremely consistent over the years and goes extremely well with prime cuts of red meat.  This is a big bold, “decadent” (described on their website) wine.  One more recent vintages I recommend decanting for a few hours.  I recently drank the last bottle of ’04 Howell Mountain Cab and really wished I had purchased a lot more.  It’s really aged nicely. 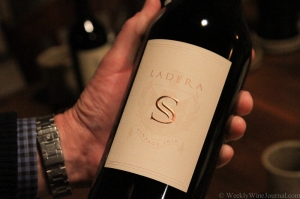 This wine is the only wine that makes reference to the Stotesbery family with the big “S” in the label.  This wine is really only available to wine club members.  Only 97 cases were made.  Its the best fruit from the best lots, it’s simply the best of the best when it comes to Ladera.   Retail price is $175 and there is a limit of 3 bottles per customer.