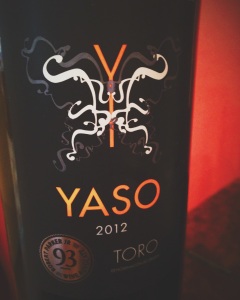 In my most recent article I mentioned that I have been exploring a lot of Spanish wines lately.  I am still extremely fond of Napa, but my budget is really liking my frugal side, and actually my palate has been really pleasantly surprised.

This wine is no exception.  This is a really nice big bold, well-rounded wine.  I decanted for an hour and sampled the wine over a 4 hour period and then again after 24 hours decanting.  The wine opened up nicely after an hour.  The nose is predominantly blackberry with a hint of cherry pie.  The palate is big, robust and drier than I expected – a good thing.  This would be a Cabernet lovers Tempranillo.  A little spice, a little chocolate a little licorice a little ripeness.  Not too much of each, and some very nice texture on the back end that reminds me of “Rutherford dust”  a texture like fine dust or chalk that gives the wine a nice weighty mouth-feel. The 13.5% alcohol is really a nice change from a lot of the new world wines which are loaded up with a generally pretty crappy cheap port like sweetness from too much alcohol.  This wine rocks.  Especially for only $10.  This would be a decent bargain at $20.

The back of this wine bottle has a little map and some interesting information about the climate and vineyard. 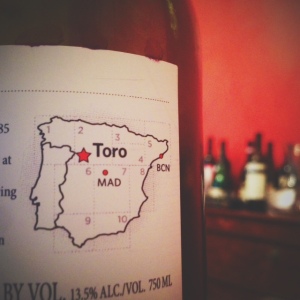 The vines are at about 2,200-2,400 feet in clay and limestone soil.  The average April to October temperature is 61.3F, which to me is pleasant because in Phoenix where I live the average temperature during that time is about 85F.  Annual rainfall in the Toro region is only about 16 inches, which makes it quite a bit drier than Napa Valley