If you follow the food and wine scene in Arizona you’ve probably heard of Charleen Badman and Pavle’s Milic’s FnB restaurant in Old Town Scottsdale.  FnB features chef driven cuisine and an all Arizona wine list.   FnB played host to a major wine tasting back in 2010 dubbed Arizona Judgment 2010, where Arizona wines competed against some of the world’s best known brands. Read more about that HERE.

Since then, the Arizona wine industry has really started to capture some national attention, especially with Eric Gomski winning several Jefferson Cup awards in 2011.  Read about that HERE. 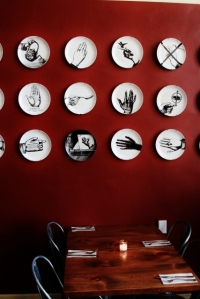 Baratin interior: The plates are from Charleen’s restaurant in NYC

One night while I was dining at FnB, Pavle began musing about starting a little wine cafe, or a place to buy wine in Old Town Scottsdale.  He hadn’t figured it out yet, but the inspiration was there and he seemed excited.

He had spent some time trying to find a suitable location when he happened to walk past a vacant building, he quickly called the number in the window.  As it turns out the building actually contained 3 separate spaces.  Also, as it turns out Charleen Badman had been wanting to open a small, local and farm fresh grocery outlet, and Brian Reeder from FnB had been wanting to start a little cafe. 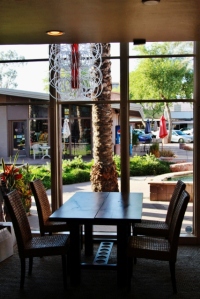 The result is an amazing synergy of wine and cuisine.  The center space is occupied by Baratin Cafe and features Arizona wines as well as well known brands by the half bottle and a simple yet inspired menu.  The most interesting part about the whole set up is that if you like the glass of wine you’re drinking, you can purchase it from the wine shop, AZ Wine Merchants.  If you like the food, you can purchase most of the ingredients from Bodega Market.  That way you can attempt to recreate some of the creations back at home.

Another really great thing about Bodega market in particular is the freshness of the product.  Bodega actually serves as a storage facility for the ingredients used in the dishes made at FnB.  And if you’re ever dined at FnB you’ll know that it is always full!  As a result they go through fresh ingredients at a rapid rate, and almost everything in Bodega is less than a day old.  In a lot of cases the items were picked out of the ground at the local farm and delivered right to Bodega, then prepared into your meal at Baratin or FnB on the same day!

At my recent visit to Baratin I was amazed ( I know, I keep using that word right?!)  I was amazed at how such simple dishes could taste so complex and rich and YUMMY!