As wine consumers we are accustomed to perusing wine reviews, sometimes as we are shopping for wines.  We are used to reading the flavor profiles and scanning for points.  We do this quickly and efficiently, searching for gems, or just for something decent to pair with tonight’s dinner.  But if we dig a little deeper there are the stories of the vineyards, the wine makers and the terroir. 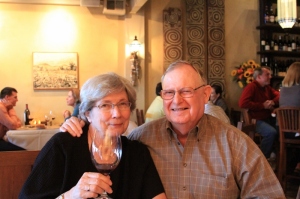 On my recent trip to Napa Valley I was treated to an amazing dinner as the guest of Robert and Lynn Craig.  I first met the legendary Napa Valley Wine producer in Scottsdale, Arizona in September of 2010 at a wine maker dinner.  After that event, Robert and his wife Lynn invited me to visit them in Napa the following summer (2011) and to attend The Taste of Howell Mountain.

Well when the time finally came, I couldn’t have been more excited, and was happily surprised that they still knew who I was!  I guess not everyone has a sub par memory like me!

We met at ZuZu tapas in downtown Napa, overlooking the banks of the Napa river.  We enjoyed a multitude of various tapas, including sautéed jumbo shrimp, and flat-iron steak.  The wine?  A bottle of the 2008 Robert Craig Affinity!

But the wine was just a back drop to the conversation.  Over our 2 hour dinner we talked about almost everything and anything that came to mind.  From my recent affliction to gluten and lactose, to their adventures in the Okavango Delta in Botswana and Alaska/Denali.

In a previous life, Robert Craig was in the Coast Guard and was stationed in the Alaskan panhandle for a while, and he said very little had changed in the nearly 50 years since he had been there. It was while he was stationed in San Fransisco that he met his future wife, Lynn. In the late 1960’s San Fransisco was the epicenter of the counter culture movement. During this time the Craig’s would venture north into the relatively undiscovered Napa Valley. Robert was involved in real estate and eventually he came across a deal he couldn’t let go and he put together an investment group to acquire vineyard land on Mt. Veeder. Robert Craig was instrumental in Mt Veeder becoming an official AVA. The investment group sold the land to Donald Hess  and Robert stayed on as General manager of the Hess Collection. In 1992 Robert Craig started his own winery, sourcing grapes from a friends Howell Mountain vineyard and making wine at various facilities.  In 1998  he acquired some prime vineyard land on a steep slope right near the peak of Howell Mountain, over looking Napa Valley to the west and Pope Valley to the east. He planted right away and in 2002 the Robert Craig Winery in its current form was born, sourcing grapes from his own land, and making wine in his own premises.

As we were discussing the serious matters of mountain fruit versus valley floor fruit and Lynn was explaining how she edits the website information, I noticed Robert sniffing the cork of the bottle of Spanish Albarino he had ordered. The cork was plastic. Out of the corner of his eye he glanced at Lynn, who sensed he was looking at her. She looked at him for a second and then smiled
“Bob, stop that!” she laughed
He chuckled and his eyes twinkled.
His endearing sense of humor, often under the radar, understated and Lynn’s appreciation of that humor are some of the things that has kept them happily married after all these years!

Well the food plates kept coming and the Craig’s kept telling me to “eat, eat!” This was a familiar feeling, as my own grandparents had often said the same thing, they used to tell me I ate like a bird..peck peck. The evening finally drew to a close, and we made plans to meet the following morning at the Culinary Institute of America in St Helena where I would join the Craig’s in their vehicle for a ride up Howell Mountain and a private tour of their vineyard!