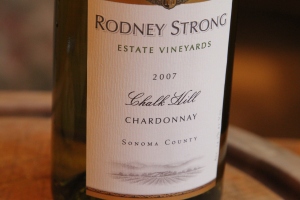 According the company literature, this wine should be enjoyed over the next 1-3 years.  It’s near the end of April, 2010 right now, so I believe we are reaching the end of this window, let’s see what it has left shall we?

On the Nose: Pear Pineapple butter and toast, not necessarily in that order, and it’s not abundantly obvious.  The nose is subtle.

On the Palate: The Palate is a lot nicer than the nose lets on.  The fruit is riper than the nose would suggest.  With 97% malolactic fermentation the fruit is predominantly green apple with a little hint of pineapple sweetness interwoven in the oak.

The finish is not that long, and not  complex, but it was well balanced.  Of the two Chardonnay’s I paired with my French baguette, Brie and roasted garlic appetizer, the Rodney Strong was a better match with that particular dish.  The other wine was Merryvale Starmont, read my review here.